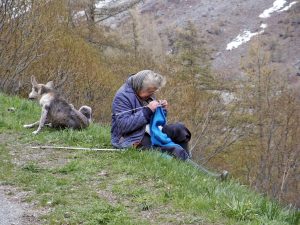 The tenth chapter of John is known as the “Good Shepherd discourse,” because for 42 verses John’s Jesus talks about sheep and shepherds.

In scripture, shepherds are almost always metaphors for kings and other leaders. Good shepherds [good leaders] do what Jesus instructed Peter to do last week…what Jesus himself does…feed the lambs, tend the sheep…Bad shepherds don’t. Bad shepherds enrich themselves, rather than the flock, they, “partake of the fat…,” says Ezekiel, “clothe [themselves] with wool, and […] slaughter the fatlings, but […they] do not tend the flock.” They don’t sustain the weak, he says, heal the sick, or love the lost; but drive them away. (Ezekiel 34:1-4).

I’m sure you’ve all seen images of Jesus as the good shepherd…with the lamb over his shoulders…it is one of the most common representations of Christ there is. It is very common in the Roman catacombs; in the centuries before Christianity became legal in 313 CE, secret Christians could put an image of a shepherd on their tombs—a secular image—without raising suspicion…but those who knew the reference got it. “I follow the Good Shepherd.”

The shepherd metaphor doesn’t work as well for those of us who are only familiar with sheep from movies like “Babe” or who only know lamb when it’s served on a plate. But there are still plenty of good and bad shepherds out there. And sometimes they’re easy to spot, and at other times they’re easy to overlook. There’s a great image of a good shepherd in today’s readings, that I’ve overlooked for years.

It’s in the Book of Acts, and her name is Tabitha…or Dorcas.

She’s depicted in the Saltonstall window, along with Elizabeth, the mother of John the Baptizer, Mary of Bethany, and Mary’s sister Martha. In his Tourbook of the windows of All Saints, Rick Montross relates that the window was given in 1964 by Mrs. Nevin in honor of her sister Ella Winthrop Saltonstall. Mrs. Nevin wanted the theme to be “Four Women of the Bible”, but was, “hard-pressed to find four women she approved of.” Makes you wonder why she objected to the others…At any rate, Dorcas made the cut.

Dorcas…Tabitha…is more than just some random woman Peter raised from the dead…read carefully and it’s clear that she is a good shepherd.

There are plenty of references in scriptures to women following Jesus, and being generally included in a list of disciples. We know women were disciples…we know about Mary and Martha, Joanna, Pricilla, and others…but Dorcas is the only woman in the New Testament who is explicitly named as a disciple. And who like both Simon Peter and Saul/Paul has both a Greek and a Hebrew or Aramaic name. “Now in Joppa, there was a disciple named Tabitha, which in Greek is Dorcas.”

So right away, we’re alerted, that this is someone special. This isn’t some nameless widow who is only there to prove how awesome Peter is…Remember at Easter, how I said we need to pay attention to the people whose stories are not often told? Dorcas is one of those people. Her story is wrapped up in Peter’s story, and it’s easy to come away thinking that Peter is the hero here…the whole book of Acts is designed to establish Peter, and Paul, as the drivers…the founders of the new Jesus Movement…the rock upon which Christ builds the church, and the engine by which the Gentiles are brought into the fold…But Luke is not a writer who includes details randomly.

The book of Acts is a little like an Avenger’s movie…it jumps around a lot…1st we’re with Peter, then with Paul, then Stephen or Philip. One moment we’re in Damascus, then Jerusalem…then out on a Gaza road…today we’re with Peter in Joppa, which is on the coast near Tel Aviv. Actually, when the story starts, Peter is in Lydda with a community of Jesus followers, and he’s just finished healing a man paralyzed for eight years. Suddenly, he’s called away by two men from another community…the community gathered around Dorcas.

Luke says, she was “devoted to good works and charity,” which is what all followers of Jesus are to be devoted to, but she is clearly more than just a nice lady. When Peter shows up, all the widows are there, displaying the clothing that Tabitha had made them…in the window she’s holding one of those garments. Widows, in the bible, are code for the most marginalized in society…Good shepherds take care of widows, bad shepherds, Luke has Jesus reminds us, “devour widows houses” (Luke 20:47). The most marginalized are Tabitha’s focus. But more than this…if she had just been some do-gooder, handing out clothes, would the whole community show up? Maybe, but these women are gathered to weep and to show off the garments she had made and gave…they knew her…these are not paid mourners, these are her friends…this is her community.

Luke doesn’t say whether Tabitha is wealthy, or a widow herself, but her house has an upper room, and can accommodate many people, so the impression is, according to one scholar, of someone who used whatever wealth they had to “offer hospitality with flair. […] it’s “easy to imagine her home as welcoming, open and full of people…[functioning] as a community center for believers. Tabitha may well have presided over a house church in her home. Quite likely her home became a drop off point for donations as she served as a reliable conduit for goods and services for believers and the wider Joppa citizenry.” But even more than that, “Her hospitality and generosity probably [provided] food, sanctuary, a home, a warm heart and a listening ear. Tabitha’s outreaching kindness undoubtedly saved lives.” [Tabitha in the Bible].

Right after she is revived, Peter again takes center stage, and goes off to stay with Simon the tanner. This is where he will have his vision and come to finally understand that “God shows no partiality” (Acts, 10:34). Tabitha and her community fade into the background, but with these little details, we know what happens. We know what happens, because we know her…we recognize her as a good shepherd. we recognize her…as someone who follows Jesus…who follows the Way of Love. We know she is going to continue building and serving this community…feeding, and gathering, and nurturing…

Jesus says that the sheep hear his voice and follow him. The community around Tabitha recognized the voice and the actions of Christ in her, and followed. The communities Luke wrote to may have included people who remembered Tabitha. They undoubtedly included people who were like her. Women who gathered others around them…organized them, gave them a voice, encouraged them to help wherever help was needed…to provide food and companionship and stylish robes to those in need.

We have Tabithas in our midst, women, and men who work consistently, and with great intention…gathering, nurturing, feeding, tending, building capacity and weaving community…The voice of The Good Shepherd echoes in them. Their stories are not often told, but we all know them. Our lives are enriched by them, our faith is deepened by encounters with them, and God’s dream is made a little bit more real through their prayerful and patient work.

Who are they in your life? Give thanks for them.