Of Angels and others…

This homily was unrecorded, a draft text of the follows, please do not cite without permission.

Tonight we’re celebrating the Feast of St. Michael and All Angels, which actually takes place on the 29th, but as it’s one of the major feasts of the church it seemed fitting to celebrate it for our first fall evensong.
Every so often there’s a story in the news about how many Americans believe in angels.
Usually it’s couched in somewhat alarmist language…”more Americans believe in angels than in evolution poll suggests!” Or “7 things Americans think are more plausible than man-made global warming! #1 Angels!”
A 2011 poll conducted by the Associated Press says 77% of Americans believe angels are real.
To me, how they ask the question is important. Years ago, I was one of those polled on a college campus, and they asked, “Do you believe in angels?” and I thought “do you mean, do I believe in little adorable, chubby-cheeked Raphaelite cherubs with rainbow wings? Not really.
Do I believe that there are things in the universe beyond my powers of comprehension who are active in doing God’s will? Then, yes. Without a doubt. When I asked for this clarification the poll taker looked at their clipboard and said, “it just says, do you believe in angels?” Well, then. “yes.”
A lot of Americans may believe in angels, but I don’t know how many of us give them much thought. Angels are one of those ubiquitous pop-culture things that show up in lots of places but I, for one, don’t spend an awful lot of time thinking about them.
When Chris and I agreed that I was going to preach this evening, I decided that I should do some research on angels, so I did what any self-respecting Gen-Xer would do…I went and re-watched the movie Dogma. 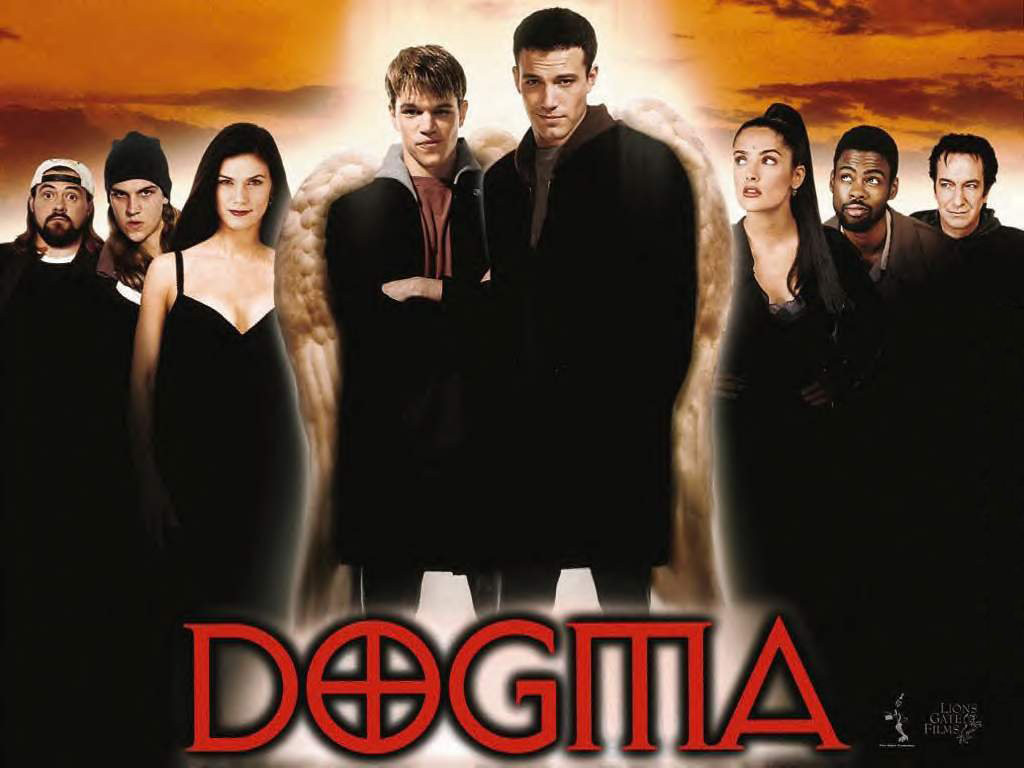 That’s the Kevin Smith movie starring Matt Damon and Ben Affleck as a pair of angles who have been banished from heaven and sent not to hell, but to Wisconsin. They think they’ve discovered a loophole in Catholic Dogma that will allow them back into heaven and the movie is the wackiness that ensues as they try to enact their plan.
I enjoyed seeing it again, but I’m not sure it told me all that much about angels.
At least the angels in Dogma are somewhat closer to biblical angels than Clarence in “It’s a Wonderful Life,” or Michael Landon on “Highway to Heaven,” or Roma Downey and Della Reese on “Touched by an Angel.”

At least for me, it’s hard to reconcile the “I’m just sent to help people out,” angles of those shows with the fearsome, world-ending appearance of the angels in our readings. TV angels are really pleasant, angles in scripture are really scary.
Our ancestors thought much more systematically about angels. A lot of what we think we know about angels comes from a Syrian monk writing around the 5th century of the common era known as Dionysius the Areopagite. He’s the one who gives us the nine orders, or choirs, of angels.
Beginning with the Seraphim—those closest to God, the ones with six wings, two covering their feet, two covering their face, and two to fly with–
Next are the Cherubim—NOT the chubby little children that Raphael painted—these are the winged creatures with flaming swords guarding the entrance to Paradise, and represented on the top of the Ark of the Covenant. They are sometimes represented with the front quarters of a lion, and the hind quarters of a bull, the head of a man, and the wings of an eagle. Or with four-faces those of a bull, an eagle, a lion, and a human.
Then continuing down the ranks come the Thrones, Dominions, Virtues, Powers, Principalities, and finally Archangels—where we find Michael, also Raphael, Gabriel, and sometime Uriel—and at the very end plain old angels.
It’s all quite dizzying.
Michael, is one of the few named angels in scripture, and as such has attracted much devotion from a very early date.
In Jewish midrash, Michael is the one who is said to have prevented the sacrifice of Isaac, saves the three young men from the fiery furnace, and the one who wrestles with Jacob.
In Christian tradition, Michael is regarded as both a warrior—defeating Satan in the battle in heaven—and a healer—the earliest sanctuary dedicated to St. Michael was associated with a healing well.
Often feast days are associated with at least quasi-historical dates…often the presumed date of the saint’s death, but since angels and archangels don’t die, the association of Sept 29th with the feast of Michaelmas came from the 5th century dedication of a St. Michael’s basilica near Rome.
In medieval England, Michalemas marked the end of the “husbandman’s year” when the harvest was done and accounts were settled, and hiring for the next year took place.
The fact that it takes place around the fall equinox is (I think) significant.
Because in addition to angels, another thing we post-modern folks don’t think an awful lot about is the calendar.
Oh sure, we are tied to our calendars but mostly to make sure that we are where we’re supposed to be when we’re supposed to be there.
But our liturgical or church calendar does much more than simply mark time…it sanctifies it.
What we are taking part in here—evensong—is perhaps one of the most ancient of all prayerful actions.
Our ancestors understood the necessity of marking the liminal times of the day, the week, and the year. Those “thin-spaces” where time and eternity, earth and space, breath and Spirit flow into and out of one another.
Morning Prayer at dawn. Evening Prayer at dusk. The two great hinges of every day.
Weekly Sabbaths establishing times of work and rest.
And yearly festivals not merely marking time but actually (re)creating and sanctifying the rhythm of existence—the rhythm of being.
Michaelmas is almost an autumnal mirror of Pentecost.
In the northern hemisphere, the triduum—the great three days of Holy Week—Maundy Thursday, Good Friday and Holy Saturday mark the dying—the pause in the tomb and the resurrection of our Lord, who becomes the first fruits of the new and unending life.
From that single seed the Holy Spirit—in the burst of Pentecost—is poured out on us to effect our transformation and the renewal of the whole earth—in this season of growth and greenness—bringing all creation closer to God’s realm.
Then as the season of growth turns to the abundance of fall and harvest our focus is increasingly drawn to the fullness of the eschaton—the edge of time—the horizon of existence. As the sun lowers in the sky, our eyes are drawn to the horizon. As the days shorten and shadows lengthen Michaelmas directs our attention to the horizon and beyond to the heavenly host—to those who are always above and beyond us—angels.
As we move toward the fall triduum—All Hallow’s Eve, All Saints, and All Souls day—the church continues to direct us to the culmination of all things—to those who have gone before—and then the coming of Christ just before Advent. The culmination of all things, dominions, princedoms, powers, virtues, archangels, angel choirs—all things find their reason and their rest in Christ.
You see, I do believe in angels, but more in the sense that there really are more things in heaven and earth than are dreamt of in our philosophy.
So for me, this year, this celebration of the feast of St. Michael and All Angels is a gift from the church in her wisdom—a reminder to keep my eyes and heart focused on these things that really are above me and beyond my ability to grasp or understand.
As the earth turns, once again, her northern face away from the sun, and we prepare again to enter the time of darkening days and cooler nights, it’s helpful to think of the heavenly hosts, the powers that I still don’t and never will totally understand—but knowing that they are working and praying and guarding and guiding and enacting God’s will…and allowing and inviting us to experience God’s grace in our own lives is somehow enough.
The 8th century scholar and monk Alcuin wrote a sequence litany for Michael and the other archangels that ends like this:

Hear us, Michael,
Greatest angel,
Come down a little
From thy high seat,
To bring us the strength of God,
And the lightening of His mercy.

And do thou, Gabriel,
Lay low our foes,
And thou, Raphael,
Heal our sick,
Purge our disease, ease thou our pain,
And give us to share
In the joys of the blessed.
Amen.