HISTORY OF ALL SAINTS

All Saints Parish was conceptualized in 1893 when 24 people who lived near Cleveland Circle believed there should be an Episcopal church in their neighborhood. At the time, there were already two Episcopal churches located in eastern Brookline: St. Paul’s Church, built and consecrated in 1852 and Church of Our Saviour, built and consecrated in 1868.

On September 10, 1894 this small group of worshippers wrote a letter to The Rt. Rev. William Lawrence, Bishop of Massachusetts, for permission to build a new church. While they waited for his reply, they started worshipping in the Beaconsfield Casino

The Beaconsfield Casino was a one-room building people gathered to bowl, dance and play pool. It was also a space the first members of All Saints Parish church would worship. On November 1st, 1894, Bishop Lawrence led the worship and the congregation officially became All Saints Parish

Dr. Daniel Addison arrived the following month becoming the first rector of All Saints Parish. He led the congregation for the next 25 years overseeing major developments within the church. With Dr. Addison’s help, the congregation found and procured land at the corner of Beacon Street and Dean Road (at $.75 per sq. ft.). Services continued to be held at the casino until the summer of 1895 while a small wooden church was built.

As the congregation continued to grow, plans for a larger and sturdier church building were made. The congregation approached the architects Ralph Adams Cram and Bertram Grosvenor Goodhue who proposed the following “perpendicular gothic” design.

The cornerstone of the present building was laid by Bishop Lawrence on November 1, 1898 and on All Saints’ Day 1899, the first worship service was held in the new stone church. At the time, only the nave had been built, no aisle chapels or chancel. Meanwhile, the original wooden church continued to be used as the parish house where meetings, meals and church school classes were held until 1910 when it was taken down.

The construction of the stone church took another twenty seven years to complete, incorporating significant revisions of the original design. Some of the changes included a new Parish House (1910) and the addition of a Rectory (1913). Inside the church, the west aisle chapel of the church was built connecting the nave with the new Parish House. In 1926, the chancel and the resting chapel were added completing the building interior. Church school classrooms, a kitchen and dining room were added to the Under Croft. The entire building, free of debt, was consecrated by Bishop Slattery on October 31, 1926.

At the dedication the architects Cram & Ferguson remarked: “All Saints, Brookline, was one of the first churches of large size which was designed by the then firm of Cram, Wentworth and Goodhue, and it is therefore one of the structures which commands the most enduring interest and affection on the part of the successors of that firm.” 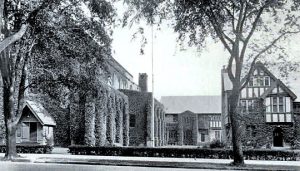 Since the mid-1930’s, the Beacon Street entrance was added as well as windows and furnishings have been constantly added or relocated. In the 1950s, the ivy that was growing all over the exterior of the church had to be removed to protect the mortar holding the stones together. In addition, the roofed entrance at the Beacon Street door was also removed.

Many thanks to parishioner, Rick Montross for this history.