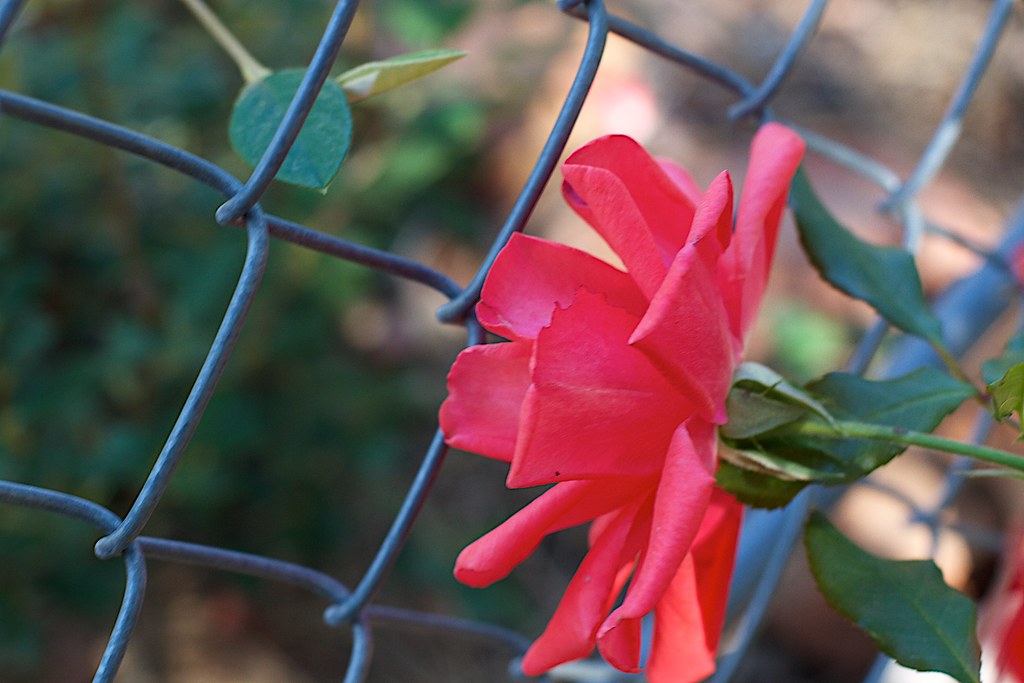 “Still Whispering Through the Fence” by cogdogblog is licensed under CC BY 2.0

Think about some precious object you have at home. An heirloom, maybe. Something passed down from parents, or grandparents, maybe even great grandparents. A important file of documents…a special set of clothes…How do you treat that object?

We have a plate. It’s painted…has a couple of apples on it…it was a wedding present to my grandmother which means it’s now over 100 years old. I doubt that it’s actually valuable…they weren’t people of means…but here’s the thing. Would it shock you to know that we feed the dog off of it? It would, right? (We don’t). We don’t feed anyone off of it. In fact we don’t even keep it with the other plates…It sits in one of those plate frames and on our mantle. It’s special, so we protect it with certain barriers…high enough small kids can’t reach it, in a stand so it doesn’t wobble around. When we lived in earthquake country, it was stuck to the shelf with clay adhesives…It’s not in with the “regular plates” so that someone doesn’t use it by accident…it never goes in the dishwasher…

It’s probably how you take care of your precious objects as well…the good china gets put in a higher up cupboard…the diary gets locked in a drawer…the passwords get stored in somewhere like last pass (not written on a post-it note and stuck on the computer…I hope!).

We put protective boundaries around the things we care about. The things that are important…in order to protect them…keep them safe. And to keep us from doing something we might regret with them. We don’t use “the good plates” everyday, because something might happen to them.

A common, but curious, phrase in Rabbinic Judaism—that’s the Judaism that was emerging around the time of Jesus, and really took hold after the destruction of the Temple in 70 CE—that says we need to “make a fence around the Torah.” Actually, the whole quote is, “Moses received the Torah from Sinai and committed it to Joshua, and Joshua to the elders, and the elders to the Prophets, and the Prophets to the Men of the Great Assembly (the Rabbis).  They said three things: Be deliberate in judgment, raise up many disciples, and make a fence around the Torah.” (Pirkei Avot 1:1)

It’s an evocative phrase…to make a fence around the Torah…what does that mean? Well, it has meant a lot of things, but mainly it means exactly what I was describing…erecting some protective barriers so we don’t fall over the cliff…If the commandment is to honor the Sabbath, and keep it holy…”six days you shall labor and do all your work, but the seventh is a sabbath of the LORD your God and you shall not do any work” (Exodus 20:9, Jewish Study Bible)…If not doing any work is the command…and the fence becomes…don’t handle tools (hard to work if you don’t even touch a tool), don’t handle money (hard to transact business—work—if you’re not reaching for your wallet)…in our world, and something I try to do (with varying degrees of success) is unplug…get off line…shut off the phone. These tactics are all barriers—fences—put up to help keep us from falling too far into a real violation.

The way Matthew portrays Jesus in chapters 5, 6 and 7—the totality of the Sermon on the Mount, (which, remember is meant to echo Moses giving the Torah on Mt. Sinai) is clearly in this model of early first century Rabbinic Judaism. These verses are often referred to as “antitheses,” but that’s not accurate. Jesus isn’t contradicting anything other Jewish teachers are saying…he’s intensifying them. In fact he just got through saying (we heard this last week)…“Do not think that I have come to abolish the law or the prophets; I have come not to abolish but to fulfill…For I tell you, unless your righteousness exceeds that of the scribes and Pharisees, you will never enter the kingdom of heaven.”

And what he’s doing today—with all of these “You have heard it said, X…but I say to you….something even more stringent—is unpacking that claim…He’s not overturning the law, he’s calling us to a deeper and more faithful commitment to it. Like many other Rabbis, Jesus is building (or re-building) a fence around the Torah and suggesting that the fences others are building are either not strong enough…or possibly even being built around the wrong things. (Source).

Another Rabbi, one closer to our own time, said something that I find helpful: In the Wisdom of the Jewish Sages: Rabbi Rami M. Shapiro offers a new take on “making a fence for the Torah.” He writes, “Make a fence for Torah. Distinguish historical form from timeless Truth; dare to change the first to uphold the second.” (Source).

That’s what Jesus is doing…he’s refocusing us on the timeless truths…and encouraging us to be bold enough to challenge the historical forms in order to uphold them.

1st century law courts operated very differently from 21st century ones. Marriage and divorce in the 1st century was vastly different from marriage and divorce now. So, we can’t simply transport all these sayings about dealing with an accuser, or divorcing, or swearing oaths into our context and expect them to make sense. They all have historical forms…but the timeless truth is that reconciliation is the ultimate goal…Committed, egalitarian, generative, supportive, mutual relationships are the goal…Being clear and honest in our intentions, and our practices is the goal…Reconciliation…mutuality…truth…faith…hope…love…those are the timeless truths…and we should guard against anything…our anger, an insult, a lawsuit…no matter their historical form…that prevent us from striving toward those goals.

We will always build fences…barriers that seek to protect the things we value…the things we love…but Lent is approaching…and it’s worthwhile to look at the barriers we have…the boundaries that we draw…the fences we put up and ask…as Jesus does today…Is this really protecting a timeless truth that I want to live into? or is it only upholding my personal preference? Am I guarding this timeless truth in a good and useful way? Or is it a barrier that only makes things worse? Did I put this fence up because I felt strong and protective, or because I was afraid and felt weak? Does this fence deepen my Christian practices? Does it make me more faithful? Does it help me follow Jesus more fully? Or does it need to come down—be set aside—given up because it is no longer useful…?  Source

I invite you to sit with those questions, and ask God for guidance with them…Holy one, Remind us of those timeless truths, help us to choose life, give us your grace, that in keeping your commandments we may please you in both will and deed.