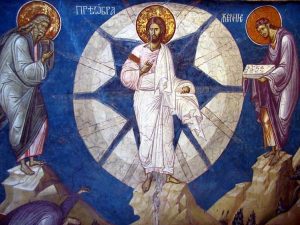 Draft text of the homily, it may vary considerably from the recorded version. Please pardon any typos, and do not cite without permission.

I have really appreciated Richard’s recent sermon series on belonging and the beloved community. He has been exploring how the very early church was formed, and how Paul communicated with these churches in the letters he wrote. We as 21st Century followers of Jesus read these epistles and often, at least I do, think “Why was this so hard for them to understand?”

Jesus walked with them as taught them. He explained over and over what was to happen to him and what they would need to do. They witnessed his miracles: the healings, the feedings, his words of grace and love to the sinners and to the broken.

It sounds pretty straight forward, right? I think we imagine we would be smarter or pay better attention or just listen more carefully than the disciples if Jesus were speaking with us.

Wouldn’t we understand his mysterious words about the kingdom of God and mustard seeds and lost sons, lost coins and lost sheep? A lot of things seemed to be lost in Jesus’ stories, now that I think of it.

If we were those disciples, we’d surely understand about him asking us to leave our families and our lives to follow him…that doesn’t seem too hard to understand.

So, let’s make believe, just for a moment or two, that we are one of those disciples in today’s gospel story. I’d like you to try, if you can, to actually picture yourself with Jesus that day. Walking up the side of the high mountain, listening to him as you always did. Picture this in your mind. Close your eyes if you need to. You and Jesus, walking up the mountain, listening to him talk about God’s Kingdom and how you will be part of it.

How do you feel? Are you confident? Excited? Are you scared? Are you thinking of going back down the hill? You are busy talking, listening, tired from the climb and then in Mark’s words, “he was transfigured before them, and his clothes became dazzling white, such as no one on earth could bleach them. And there appeared to them Elijah with Moses, who were talking with Jesus.”

How would you have experienced this? We can read the words that explain Jesus’ change in appearance but how in the world would you, if you were standing there, understand this? Jesus’ clothing shining dazzling white and Elijah and Moses there with him?

I’ve had more empathy for Peter recently. After trying to place myself directly into this gospel story, I totally understand why he was trying to DO SOMETHING. If you don’t understand something, just start being functional, right? He says awkwardly to Jesus, “Rabbi, it is good for us to be here; let us make three dwellings, one for you, one for Moses, and one for Elijah.” Mark adds, “He did not know what to say, for they were terrified”.

This, I imagine, was the reality of being a follower of Jesus. Moments of amazement and joy at the miracles and thoughts of a new kingdom where the last would the first, the meek would inherit the earth and those who were persecuted for the sake of righteousness would claim the kingdom of God; followed closely by intense times of confusion, jealously and terror of the unknown. Peter has experienced these two feelings at the same time before and here he is again. Wanting to be helpful, trying to care for the temporal needs of Jesus and much to his amazement Elijah and Moses but knowing somehow that something has changed. Something is different, something important has just happened here and although he doesn’t seem to recognize it, something has also begun to happen to Peter.

Transfiguration is classically defined as:

a : a change in form or appearance : METAMORPHOSIS

b : an exalting, glorifying, or spiritual change

What I have wondered, what I have pondered and what I have imagined is: Who was actually changed in this experience? Was Jesus different after this encounter with the Holy? Mark says. ”Then a cloud overshadowed them, and from the cloud there came a voice, “This is my Son, the Beloved; listen to him!”

It appears that after this announcement, after Elijah and Moses left the scene, it is simply Jesus with them again. Did Jesus change or was he always God’s son, God’s beloved?

I would like to suggest that is was in fact the disciples with him that day that began to be transfigured or began their metamorphosis that day.

The time for being confused and terrified had to soon come to an end. As those who would have to carry on the ministry of Jesus to bring this new Kingdom of God to fruition as the Church, it was time to know to whom they were committing their lives, to whom they ALL belonged and that they now were also the beloved children of God.

Transfiguration Sunday is right before Ash Wednesday and the church’s season of Lent because it marks a final turning point in this metamorphosis of the disciples. In the next weeks they will walk with Jesus on his journey toward Jerusalem and the cross. They will understand the peril they will face, that their own ends will not be any better than Jesus’. They will share in his passion, struggle to understand why they agreed to follow him in the first place, deny knowing him, and then try to be able to comprehend his resurrection and their part in this Good News that would be shared to the four ends of the earth.

a : a change in form or appearance : METAMORPHOSIS

b : an exalting, glorifying, or spiritual change

It was them who were transfigured that day. A metamorphosis, a spiritual change. There was no going back, no being the same after experiencing this.

I wonder though, getting back to us, to you and to me and to that question I ask you a while ago now, if you were with Jesus that day, saw him with his clothes shining brighter than anyone could bleach them, standing with Elijah and Moses. What would you have done?

In what way would you begin to be transfigured, to begin a metamorphosis, to start to be spiritually changed? In what way have you already traveled with Jesus and changed so much that there is no turning back, no being the same after experiencing this?

Do you have an idea of how you might travel with Jesus during this season of Lent and to share in his Passion, to understand the highs and the lows of being a follower of Jesus today? Each of our lives is different. Not all are called to serve God in the same way but all who have seen the bright light of the North Star or the shining garments of God’s beloved are in fact called to follow that light and in fact to BECOME that light for others. I’d like to leave you with that thought today. Over these next weeks of Lent moving toward Holy Week and Easter, how will you personally reflect this Epiphany light in your world?

Start today, start where you can and remember… there will be no turning back, no being the same after experiencing this.