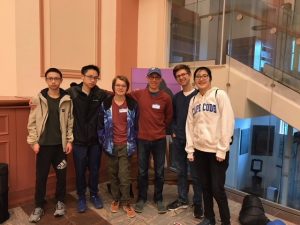 Good morning.  A couple of weeks ago, I had the honor of chaperoning our Parish’s trip to City Reach.  Before wrapping up this year, Sam and Miles came up with a plan for us to coordinate our reflections in a way that we haven’t before and with more focus on what we, as a Parish, can do to address what we’ve seen as the needs in the community we served.

First, a few statistics, Department of Housing and Urban Development recently estimated that over 20k of MA residents were homeless on any given day.  Imagine that the entire town of Winchester or Acton or Sandwich or Canton was homeless. The entire town…

Nearly 20% of this homeless population were made up of families.  Scarier still, there were nearly 500 were unaccompanied youth that were homeless. Imagine it: 14 years old, no family and homeless.

Further, it’s estimated that 20k public school students experience homelessness at some point every year.  It’s obvious how that impacts a child’s ability to learn and pay attention.

How did we get to this point?  Causes are myriad and each unhoused person I’ve met has a unique story – and most want to tell that story.  That said, I’d like to call your attention to just one statistic: according to the National Low Income Housing Coalition, one needs to earn $28.64 an hour – and work 40 hours/week, 52 weeks a year – in order to afford a two bedroom apartment in Massachusetts.  Undoubtedly, this figure is higher in metro Boston. Note that this is more than twice the State’s minimum wage. Within this context, it’s not surprising that we are faced with the problem that the three of us saw first hand.

What’s great about the City Reach program is that it allows us to move beyond the statistics and to be offered the smallest of windows onto what life must be like on the streets.  We know that the program isn’t going to solve homelessness – that’s not its goal. That said, maybe we can soften – ever so slightly – some of its rougher edges.

This past City Reach marked the third time that Miles and i attended and it was just as groundbreaking and eye opening as it always had been. Having attended two City Reaches beforehand made me into almost a veteran of the procedures, but even someone who is very experienced can still learn new things. There is always more to learn about this group of people who are so far removed from what is normal society to privileged people like us.

One of the traditions of City Reach is the telling of stories in larger groups on the Friday night. Each of the hosts stands in front of us and gives a speech. it could be about their life, personal anecdotes, or just some advice that they wanted to give us. Their stories were stories of loss, anguish, pain and failure, but we also heard tales about maintaining hope and staying positive.

A repeated motif that we heard throughout our stay at St. Paul’s was that our hosts just wanted to be treated like actual humans. A specific quote from a man named Ayo struck me, as he was giving his introductory speech in front of the groups. The specific thing that he said was ‘homeless people are not numbers’, and those 5 words were completely eye opening to me. Homeless people are sick of just being treated like a statistic, they’re lonely and tired of being ignored.

So. What can we do about this problem? The loneliness is a huge issue that is constantly underappreciated, but it’s not insurmountable. The easiest way to ease someone’s loneliness is incredibly simple. Just talk to them! Say hello to them as you walk by, or even just look them in the eye and smile. Acknowledgement is key.

Unfortunately, just saying hello to homeless people won’t fix all of their problems. It might raise spirits and boost morale, but to really fix these problems requires something a little more tangible. Thankfully, those ways are super simple, cheap, and take up very little time!

After hearing about our experiences at City Reach, I really hope that you want to look into ways to help with outreach. Luckily, there are a few really simple ways to help people in need. One way would be to simply buy an extra meal at a restaurant for someone outside. Giving away Dunkin Donuts gift cards is another good way to help. Not only will that allow them to buy some food, but it will also give them access to a private bathroom, and they can be bought for $5 extra next time you get your morning coffee. There are also several programs such as Crossroads and MANNA that you can volunteer at, both of which you can find information about in the hallway. Or you could donate to the local Food Pantry, they always accept donations of both food, and money. In fact monetary donations can be a lot more helpful than canned goods, because it allows them to buy fresh produce. If you have any clothes to give away, day shelters like St. Francis House do always take donations.

We also heard from many people at City Reach about the needs they felt were not met by the donations this year. These included large shoes and women’s shoes, belts, sunscreen, women’s clothes, underclothes (specifically undershirts) suitcases / large bags, blankets, and bed rolls.

Another common thing we heard from the community was that local lawmakers’ policies have largely ignored the problem of homelessness in Boston. Mayor Walsh has only just now started making policies to help the un-housed, and Governor Baker hasn’t made any significant moves to fix this overwhelming issue. Email Mayor Walsh at MAYOR@BOSTON.GOV, or contact Charlie Baker at www.mass.gov. You could also write a letter, or call Mayor Walsh at (617) 635-4500 or Gov. Baker at (617) 725-4005.

Homelessness is not something that can be fixed like that, it just won’t. Shelters usually aren’t trusted by members of the community. Almost everyone has to wait over 3 years to get housing. But if there’s one thing that should be taken away from this, it’s that the homeless are not numbers, they’re people. Not lazy people who never worked for anything, they’re people put in a horrible situation, out of their control, and who work harder than most of us do every day just to survive.

One of the things I’ve truly enjoyed about chaperoning City Reach is watching what our youth take away from the experience.  Sam and Miles didn’t want to talk about whom they met this year or how they gained a new perspective. Rather, they wanted to figure out a way to turn their experience into concrete actions that all of us can take to alleviate – even if in a seemingly small way – the burdens of the unhoused and those living on the margin.  I hope that you’ll join us in figuring out how we can each to step out of our own comfort zones and help our neighbors who are truly most disadvantaged.